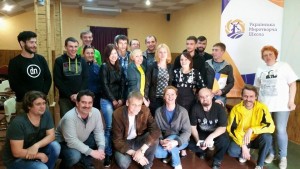 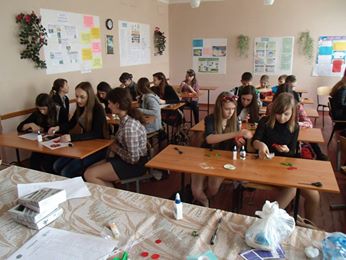 Summary of 1st Year of operations compiled May 2015.

Denial of the reality of war in some eastern and southern regions of Ukraine, that were not occupied by the Russia-sponsored separatists and terrorists.

Lack of counteraction strategy in relation to the information war led by the Russian Federation, which invokes anxiety and hysterical reactions in mass media consumers.

Lack of a new model of local governance (most citizens agree that a reform is necessary, but they lack a vision of reform).

Lack of a strategy for integrating the population of the Donbas region into Ukraine and Europe.

Education of adult activists – capacity building and sharing the knowledge of how to organize a social dialogue, knowledge and skills of social transformations and local government reforms based on experience of post-communist countries, history of self-governance in eastern Ukraine.

We have launched the school of social intermediaries, which trains practitioners in conflict transformation and improving public communications. The focus of the school is on the theory of conflict, conflict analysis skills, psychology of conflict, visions of a mediator’s role, and the social networks theory.

We are drafting an extensive communication strategy aimed to establish, maintain and develop relations between the groups of activists, journalists, public servants, schoolchildren and teachers from different regions of Ukraine. Key component of the strategy is broad inclusion of citizens into discussion and drafting the strategies of local and regional development as a mandatory precondition of decentralization.

We have launched the ongoing historical dialogue via the definition of facts of national and local history and active discussion of interpretations of these facts in social memory. We focus on the history of colonization and development of local governance in the region of eastern Ukraine, known as Slobozhanshchyna, as a highly relevant model for acquiring the peaceful solution in Donbas. The map of Slobozhanshchyna  in XVIII almost completely corresponds to the map of Ukrainian government – controlled territories.

Another way to build confidence is to ensure equal rights of different religious communities. In the previous years, rights of all religious groups except those of the Moscow Orthodox church were limited.

There is also a need to strengthen professional education of journalists and support their ability to create long lasting socially resonant projects. Journalists need to become aware of theory and practice of information wars; know how to provide high quality and unbiased war and conflicts coverage and build long lasting trust; how to cover the problems of vulnerable groups and internally displaced persons.

To enhance people’s safety and the rule of law, local civilian police administrations need to be established in the anti-terrorist operation zone, facilitated by expert social intermediaries. The main tasks of these administrations are to resolve current problems experienced by the local population and accelerate the formation of local communities. Civilian police administrations should work closely with commanders of Army and National Guard units, local Ukrainian activists, religious leaders from different religious communities, and the local authorities.

The strategy and tactic of these new administrations requires broad inclusion of citizens into maintenance of security and safety within their communities. The strategy foresees paradigm shift from police as repressive body to community service model and creation of new image of the police. The main indicator of success would be substantial increase of citizens’ trust into the police.

The Ukrainian Peacebuilding School project is implemented by a coalition of civic and government organizations of Ukraine and Poland and supported by the British Embassy in Ukraine.