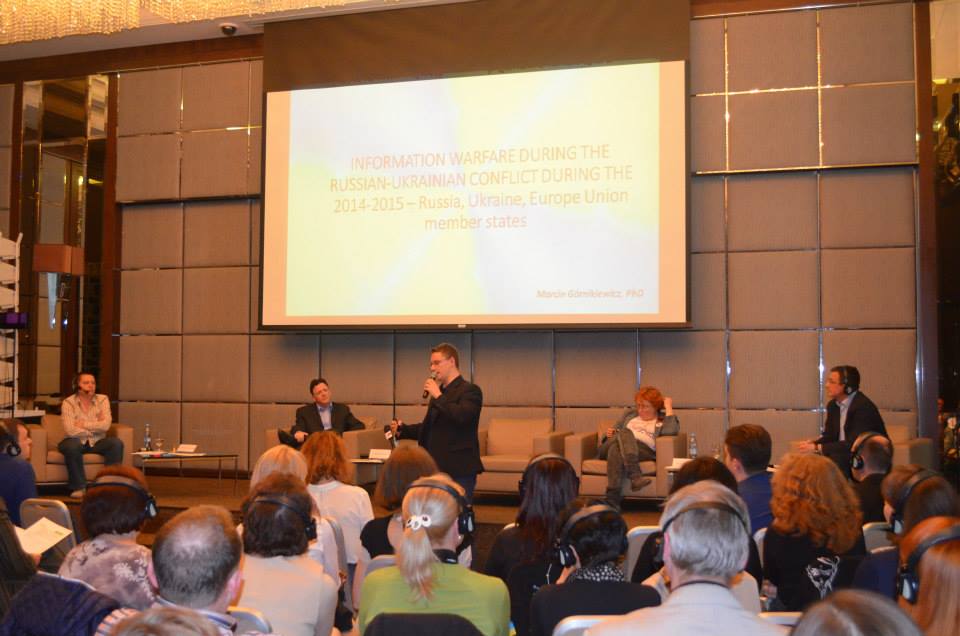 Discussion points for the public debate on INFOWAR AND INFORMATION SECURITY. PROPAGANDA AND NEW MEDIA held in the framework of the Kyiv Dialogue project in Kharkiv on May 19, 2015.

What could be done about it?

Summary of 1st Year of operations compiled May 2015.

Denial of the reality of war in some eastern and southern regions of Ukraine, that were not occupied by the Russia-sponsored separatists and terrorists.

Lack of counteraction strategy in relation to the information war led by the Russian Federation, which invokes anxiety and hysterical reactions in mass media consumers.

Lack of a new model of local governance (most citizens agree that a reform is necessary, but they lack a vision of reform).

Lack of a strategy for integrating the population of the Donbas region into Ukraine and Europe.

Education of adult activists – capacity building and sharing the knowledge of how to organize a social dialogue, knowledge and skills of social transformations and local government reforms based on experience of post-communist countries, history of self-governance in eastern Ukraine.

We have launched the school of social intermediaries, which trains practitioners in conflict transformation and improving public communications. The focus of the school is on the theory of conflict, conflict analysis skills, psychology of conflict, visions of a mediator’s role, and the social networks theory.

We are drafting an extensive communication strategy aimed to establish, maintain and develop relations between the groups of activists, journalists, public servants, schoolchildren and teachers from different regions of Ukraine. Key component of the strategy is broad inclusion of citizens into discussion and drafting the strategies of local and regional development as a mandatory precondition of decentralization.

We have launched the ongoing historical dialogue via the definition of facts of national and local history and active discussion of interpretations of these facts in social memory. We focus on the history of colonization and development of local governance in the region of eastern Ukraine, known as Slobozhanshchyna, as a highly relevant model for acquiring the peaceful solution in Donbas. The map of Slobozhanshchyna  in XVIII almost completely corresponds to the map of Ukrainian government – controlled territories.

Another way to build confidence is to ensure equal rights of different religious communities. In the previous years, rights of all religious groups except those of the Moscow Orthodox church were limited.

There is also a need to strengthen professional education of journalists and support their ability to create long lasting socially resonant projects. Journalists need to become aware of theory and practice of information wars; know how to provide high quality and unbiased war and conflicts coverage and build long lasting trust; how to cover the problems of vulnerable groups and internally displaced persons.

To enhance people’s safety and the rule of law, local civilian police administrations need to be established in the anti-terrorist operation zone, facilitated by expert social intermediaries. The main tasks of these administrations are to resolve current problems experienced by the local population and accelerate the formation of local communities. Civilian police administrations should work closely with commanders of Army and National Guard units, local Ukrainian activists, religious leaders from different religious communities, and the local authorities.

The strategy and tactic of these new administrations requires broad inclusion of citizens into maintenance of security and safety within their communities. The strategy foresees paradigm shift from police as repressive body to community service model and creation of new image of the police. The main indicator of success would be substantial increase of citizens’ trust into the police.

The Ukrainian Peacebuilding School project is implemented by a coalition of civic and government organizations of Ukraine and Poland and supported by the British Embassy in Ukraine.

Students set up a tent camp and occupied the Central Square of the capital city Kyiv with political demands, especially that the mandatory military service should be limited to the territory of Ukraine. The hunger strike lasted for 15 days.

The students reached most objectives, the demand about military service was the first satisfied.

People started to name the Square “Maidan Nezalezhnosti” or Independence Square. This name became legit after Ukraine announced its independence. All Maidans started there.

Missing journalist Georgiy Gongadze was suspected of being assassinated by order of president Kuchma. The government denied his death and introduced media censorship.

Journalist’s friends set up a tent camp and started an occupation strike. The protests united opposition politicians and NGOs.

To break through the government’s information blockade, protest leaders decided to set up a website. The linguist Oleksander Bogomolov came up with the name for this website and the term to describe the protest – “Maidan”.  According to his definition, “Maidan” is an occupation strike in the central square of the city.

The “Maidan” website and its administrators (Oleksander and me) were trying to introduce the new meaning of this word for 3 years.

On the dawn of a cold November day, the tent camp was set up and an occupation strike started to protest the falsified results of President’s Election. The Orange Revolution introduced the protest meaning of “Maidan” word into Ukrainian language.

Maidans lasted for weeks in Kyiv and many other cities, including in my native Kharkiv. The strike ended with inauguration of President Yuschenko.

The Orange Revolution combined efforts of political parties and activists groups. NGOs played a vital role in maintaining the infrastructure of protests and fundraising.

After the Parliamentary Election Socialist Party left the democratic coalition, forming majority with the reactionary parties thus violating the promises to electors.

Government introduced draft of Tax Code, which could destroy small business in Ukraine. Tent camp was set up with demand to veto the Code. Protests lasted country wide until government complied with demands partially.

Parliament passed the “Language Law” perceived as a threat to Ukrainian language. An occupation strike started in Kyiv and other towns of Ukraine. Citizens demanded to recall the law. Protest was not successful.  It was dismissed with brute police force.

The Euromaidan or Revolution of Dignity is the real revolution in terms of political science, as it changes the social order. The key of its success is the continuity of protest traditions and the lessons the Ukrainian civic society has learned from every success and failure and repressions.

All efforts of politicians to organize Maidans failed. Maidans are fundamentally civic.

Most students striking during the Revolution on Granite participated in ALL Maidans. Each Maidan involved new organizers who carried the cause further. Communities instrumental to the infrastructure of protests were networking between maidans. The “Maidan” website was one of the major networking tools of civil society for 13 years.

Rhetorical question is whether any intelligence service of the world could provide such continuity?

Some wonder when the next Maidan will occur in Ukraine. I hope there will be no need for this extreme protest technology as our country is set on a solid path of transit to democracy. However, every new Ukrainian government should know for sure – the Ukrainian people will stand up again, if we see fundamental violations of democracy.

We know how to do that.